You are here: Home / Blog / The Good, the Bad and the Ugly of Reputation Management Big things are coming for DFWSEM in 2015!

Our March meeting began with members eager for news from the Board, and they had plenty to deliver.

After two months of glowing reviews for NOAH’S as our new meeting place, the DFWSEM Board decided to sign a contract for the remainder of the year. This paves the way for unlimited food options and best of all, FREE drinks!

DFWSEM continues to grow as we welcome new individual and corporate memberships. Go ahead and invite a friend or colleague to next month’s meeting.

March brought us breaking news about our annual State of Search conference from the DFWSEM Board. The decision has been made. The November conference will be held at Deep Ellum this year. Stay tuned for more news and details about speakers.

Have you heard our big news? #StateOfSearch is moving! RT @Editrix_Steph: State of Search in Deep Ellum this year. Very swank. #dfwsem

Andy Beal came to Dallas to speak at our March meeting by way of Brighton, England via Raleigh, North Carolina. Not daunted by the journey, he went right to breaking down some good, bad, and really bad examples of reputation management by big brands.

We’re sure we did not imagine the audible intake of breath when Andy dropped his first bombshell on the room: “97% of customers who make an offline purchase will conduct online research into your reputation”. Well that made everyone sit up and take notice…and things just got better from there.

Lessons Learned from 10 Ways Companies Have Screwed Up

Anyone who hadn’t already inched closer to the edge of their seat began leaning in as Andy cited actual real-life examples of Big Brands getting reputation management totally wrong. Each example brought with it a clear lesson and the class became more exhilarating as Andy took the crowd on a roller coaster ride through the highs and lows of some of the world’s best known corporations. Satya Nadella and Equal Pay for Women — As the new CEO for Microsoft, Nadella made the comment that women should depend on karma for better pay.
Lesson Learned: What the CEO says and does is also a reflection on the company. You only have one reputation. Don’t ruin it.

Emil Michael — The Uber CEO thought his comments about stalking journalists who said negative things about his company were ‘off the record’.  They weren’t.
Lesson Learned: You are always being judged and nothing is really off the record. Private moments can be caught on tape and come back to bite you.

Emma Way, bicyclist hater— After colliding with a cyclist in her car, Ms. Way tweeted that she “Definitely knocked a cyclist off earlier“, then claimed she had right of way, complaining that cyclists paid no road tax. In addition to creating a social media storm, she was charged by police and convicted in court.
Lesson Learned:  The internet is not private. Don’t brag about your crimes and misbehavior on Twitter and Facebook. Law enforcement officials are watching.

Comcast Won’t Let You Cancel Your Cable — Comcast became synonymous with a customer service nightmare after a recording of a customer trying to cancel his cable service went viral in 2014.
Lesson Learned:  Train your employees to understand your customer service message.

Family Feud Twitter Debacle —When you make a mistake and tweet from the wrong account, don’t say you got hacked. Make sure you are logged into the right account.
Lesson Learned: “I was hacked” is the new “I was drunk” in social media. People aren’t buying it.

Malaysia Airlines Plane Crash— Know your audience and keep everyone else in mind with marketing promotions. Running an Ultimate Bucket List contest after a plane crash disaster is not great timing and comes across as insensitive.

British Airways — Go where your customers are and be available when they need you. When customers reach out to you after hours, don’t say you’re only available during business hours.

Don't automate your engagement! You never know what might happen to make your well-intentioned engagement seem insensitive. #DFWSEM

DiGiorno Pizza and #WhyIStayed— The frozen pizza company came off as ignorant and insensitive jerks when they tweeted about their pizza using a hashtag relating to domestic violence.
Lesson Learned: Don’t news-jack a hashtag if you don’t understand its purpose.

Brian Williams, Heroic Journalist or Big Fat Liar — For several years, NBC news anchor, Brian Williams has told the tale of his harrowing adventure of coming under mortar fire while reporting in Iraq. It turned out that this story was not true.
Lesson Learned: Your lies will eventually come to light. Just ask Lance Armstrong.

How to Do It the Right Way

After providing poignant 10 lessons on bad reputation management, Andy showcased a few examples of some brands that have turned a potential disaster into a big win.

Chevy took what could have been an embarrassing social media and PR moment and turned it to advantage. When  Chevy regional zone manager,  Rikk Wilde bungled his speech during a truck giveaway at the World Series, the company turned lemons into lemonade, using his  “Technology and Stuff” gaffe to create a successful viral campaign.

The #DFWSEM hashtag just kept blowing up as the crowd of more than a hundred responded to the vast array of tips and insights from Andy Beal.

You don't have to be grandiose; small things can help build a reputation. #DFWsem

.@AndyBeal: Google Alerts a good way to track conversations about your company for free. (Yep. That's been my experience.) #dfwsem

#DFWSEM Keep in mind that what you post on social media is not just seen by your customers.

If you want to learn more about reputation management, you can read Andy Beal’s new book, Repped: 30 Days to a Better Online Reputation.   Andy has made it available as a gift. You can download your FREE copy HERE.

Andy Beal at DFWSEM: Reputation Roadkill and How Not To Get Run Over

Ukulele addict and online reputation management (“ORM”) expert Beal presented Reputation Roadkill — Learning from the ‘OMG’ Moments of the Biggest Brands. His examples were both international and capable of inducing winces before he concluded with some cases of companies handling social media challenges right. AG Search Blog – by Stephanie Studer

Networking and Pizza and Stuff DFWSEM members are loving Noah’s comfortable meeting room and the additional space we have for networking. Now we have a lovely place to gather together before the meeting for snacks and a drink, as well as after the meeting for pizza and more free drinks. 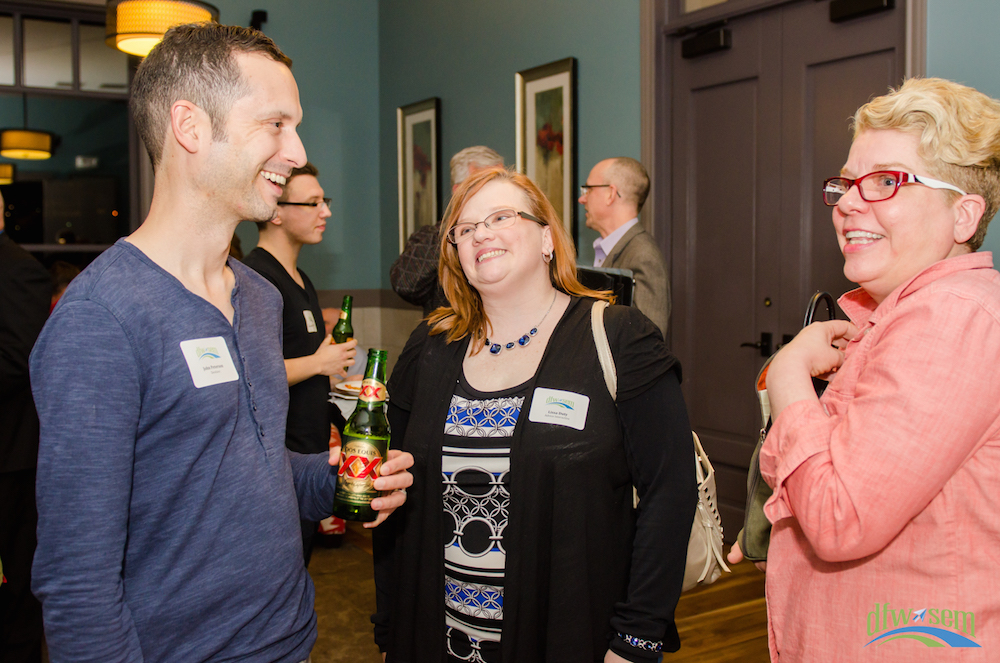 So, come early and stay late. One of the  benefits of membership in DFWSEM is the excellent networking!